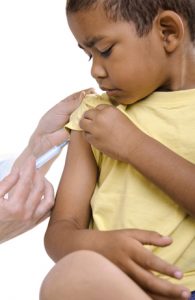 5-in-1 (DTaP/IPV/Hib) vaccine – this single jab contains vaccines to protect against five separate diseases: diphtheria, tetanus, whooping cough (pertussis), polio and Haemophilus influenzae type b (known as Hib – a bacterial infection that can cause severe pneumonia or meningitis in young children)

Measles, mumps and rubella (MMR) vaccine, given as a single jab

From 3 years and 4 months (up to starting school)

4-in-1 (DTaP/IPV) pre-school booster, given as a single jab containing vaccines against diphtheria, tetanus, whooping cough (pertussis) and polio

3-in-1 (Td/IPV) teenage booster, given as a single jab and contains vaccines against diphtheria, tetanus and polio

There are some vaccines that aren’t routinely available to everyone on the NHS, but that are available for people who fall into certain risk groups, such as pregnant women, people with long-term health conditions and healthcare workers.

There are some travel vaccines that you should be able to have free on the NHS from your local surgery. These include the hepatitis A vaccine, the typhoid vaccine and the cholera vaccine. Other travel vaccines, such as yellow fever vaccination, are only available privately. Find out more from our section on travel vaccines.

Coronavirus: Due to COVID-19 we are minimising the risk of infected patients visiting our practice, to help keep our patients safe and maintain routine services. With immediate effect, all appointments must be assessed by our staff over the phone prior to any visits to the surgery. We will no longer be booking appointments online or over the counter until further notice. - Visit https://111.nhs.uk/covid-19 for further guidance
INFO